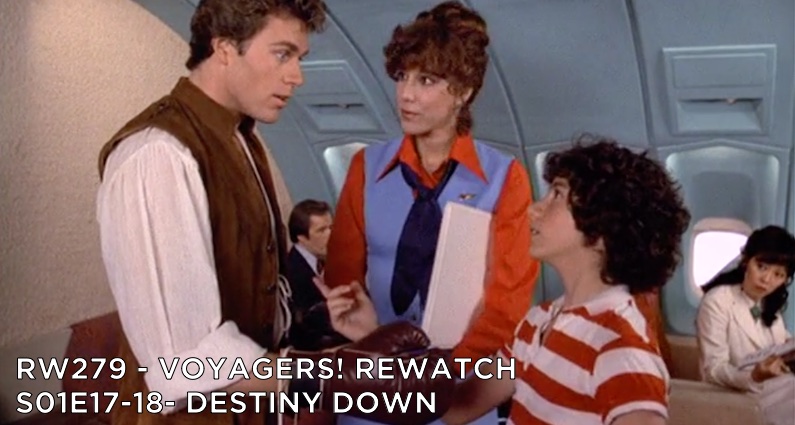 In this weeks Voyagers! Rewatch, Cory and Tom call action on the fight of the century as they discuss episodes 17 & 18, “Destiny’s Choice” and “All Fall Down.”

Bogg and Jeffrey land in Hollywood, 1928, onto the set of what is to be the first talking film. Bogg, not realizing that it is a movie set, jumps into the scene to save the actress Veronica Bliss, which subsequently ends up with them getting their clothes and Omni taken away, believed to be studio property. Luckily, Veronica, who had just been fired by the director, comes to their rescue, saving them from a visit to the police, and while talking with her, they come to find out that the director of the film is Franklin Roosevelt who should have been a career politician at this point in history. Veronica also reveals that the studio has been having issues with getting this movie finished due to death threats and other problems that keep coming up on set.

Bogg goes back to the studio at night to search for the Omni and ends up getting arrested after a bomb goes off, but Veronica bails him out, revealing that she knows the reasons for the movie’s problems, a security guard named Sam who had fallen in love with her.

The next day Veronica sneaks the Voyagers onto the set so that Jeffrey can find the Omni and Bogg can try to prevent an attack on Roosevelt’s life. Jeffrey enlists the help of some child stars to retrieve the Omni while Bogg keeps a watch from the rafters and ends up swinging down and tackling Roosevelt, pushing him out of the way of a fallen light. Sam is quickly fingered as the culprit by other studio crew and he admits to it, explaining that he did it all so that Veronica could continue on as a silent film actress due to her lisp which would hinder future as an actress. With the life of Roosevelt secured, Jeffrey and Bogg travel back to…

1924, New York, where Bogg passes himself off as a repairman in order to convince Roosevelt to pursue politics rather than Hollywood as his career while Jeffrey heads off to retrieve Roosevelt’s newly finished script from being sent out. Bogg’s mission is hampered by Roosevelt’s mama, who insists on treating him as a complete invalid, incapable of taking care of himself. When Roosevelt shows signs of excitement at being invited back into politics, his wife Eleanor is supportive but is quickly rebuked by mama and decides she will leave her husband, unable to deal with the domineering mother in law. Bogg manages to convince Roosevelt to try and overcome his illness by first pushing him to find a way to get himself out of bed and into his wheelchair and then how to use crutches to get around. With his confidence restored, and Jeffrey returning, having stopped the script, Roosevelt decides to return to politics, and our heroes return to…

Hollywood, 1929, where they see that the first talking movie The Jazz Singer, is being filmed instead of Destiny’s Choice and Veronica is now living her dream as a caterer, while Jeffrey and Bogg enjoy one of her lunches and a green light.

Oliver Clark played Sam in this episode. He had a part in “They Might Be Giants”, a 70’s Sherlock Holmes/Don Quixote film which inspired the band name. He was also the original Mr. Belding in the pilot for “Good Morning, Miss Bliss.”

Mama was played by Angela Clarke who played the mother of another historical figure we’ve seen, Harry Houdini, in the movie Houdini (1953).

Ellen Geer played Eleanor. She also played Mary on the TV series “Beauty and the Beast” and later appeared in “Something Wicked This Way Comes”. She still works occasionally, and recently did a movie called “June” with Felicia Day.

Roosevelt was played by Nicholas Pryor. He’s still a working actor; he played Chancellor Milton Arnold in “Beverly Hills 90210”, appeared in “Risky Business” and an episode of “Cover Up.”

The movie “Sunrise At Campobello” tells the story of FDR’s return to politics.

The Terrible Tots were a take on The Little Rascals; the production wasn’t allowed to use the name.

Another production Error: Bogg is searching for the Omni, he spots it in the jewelry box but when he pulls it out it’s just a pocket watch.

Bonnie Urseth, who played Veronica Bliss, overcame a real childhood lisp before she became an actress. She went to a special school to correct it. In a 1983 interview she said her role in Voyagers was the most poignant and dramatic thing she’d done up to that point because of it.

Bogg and Jeffrey find themselves in the private training camp of The Brown Bomber himself, boxer Joe Louis. Unfortunately, Joe is feeling nervous about his upcoming fight against German Schmeling due to his belief that losing the match will show the whole country that the “black man” isn’t good enough. Bogg poses as a boxer that was sparring with Schmeling and faces off against Joe but Bogg gets in a lucky punch, pushing Joe to decide to retire and not go through with the fight. Some of Joe’s other sparring partners decide to get revenge on Bogg by pressuring him into a match but Jeffrey activated the Omni sending them both to…

1970, somewhere over Nevada, right onto the floor of a plane. As the heroes try to explain their sudden presence, a man comes forward revealing he has a bomb in his briefcase. After radioing the airport with his demands, he takes Jeffrey into the cockpit with him as he boobytraps the bomb suitcase. Upon returning to the cabin to retrieve a pilot to land the plane, a passenger jumps at the hijacker along with Bogg which ends up activating the trap, gassing and knocking out everyone except Jeffrey who manages to make it to the cockpit. Jeffrey radios for help and a veteran pilot is able to help talk him down, landing the plane safely. The hijacker is taken into custody as Jeffrey wonders why they were there, just narrowly missing seeing Georgia governor and future president, Jimmy Carter. Rather than explain it to Bogg, the two return to…

1938, confronting Joe Louis again. Joe explains that losing this match would be a win for the Nazi party and anyone who wasn’t part of their cause. Jeffrey and Bogg manage to convince him to stop and think before giving up as he leaves to take a walk. Just as all hope seems.lost and Joe’s sparring partners decide to start up another fight against Bogg, Joe returns, determined to fight again. His trainers, along with Bogg and Jeffrey, put Joe through intense training, enough so that when he faces off Schmeling in the ring, he is able to win in the very first round. As Joe, his team, and the nation cheers, so do Jeffrey and Bogg, celebrating also, their green light. 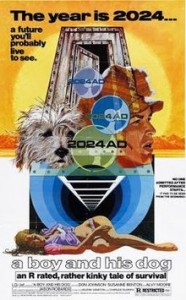 Robert F. Lyons played the hijacker (Stewart). He mainly worked in the 70’s and 80’s, and also appeared in “June” with Ellen Geer. He’s had sporadic roles over the last ten years.

Joe Louis was played by Sam Scarber. He played Warden Clifton Myers in the QL episode Revenge of the Evil Leaper.

The Co-Pilot was played by Michael Swan. He was the Dodgers Announcer in “Captain America: The First Avenger” and Officer Pappas in Friday the 13th Part 6. Most recently he’s appeared in the series “Hilton Head Island” and the movies “Piranhaconda,” “Scared Topless” and “Attack of the Killer Donuts.”

Wally Hanna played by Jimmy Carter, having played him again previously in “Good-bye Cruel World” and after in “Saddat”. Originally the script had John Wayne on the plane.

Lee Weaver was Dave in this episode. He later played Remy’s father on the Sliders episode Invasion.

Next week we’ll be discussing the final 2 episodes of Voyagers! “Barriers of Sound” and “Jack’s Back”.

Do you want to buy this series (from Amazon or iTunes)? Do you want to help support The Rewatch Podcast and the other Golden Spiral Media podcasts? You can do that by clicking this link: https://www.goldenspiralmedia.com/support. We would greatly appreciate it!

Send in your feedback by calling 304-837-2278 or by visiting www.goldenspiralmedia.com/feedback