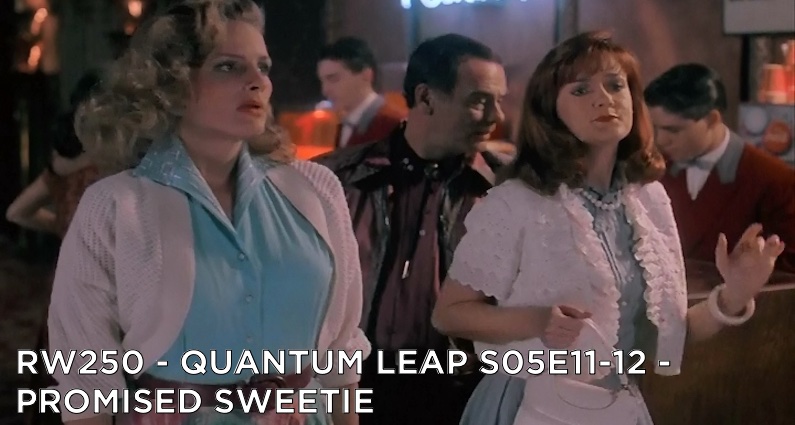 In this weeks episode of the Quantum Leap Rewatch, Cory and Tom rob from the rich and blow it all at the track as they discuss season 5 episodes 11 and 12, “Promised Land” and “A Tale of Two Sweeties.”

Sam leaps into Willie Walters Jr, one of three brothers in the process of robbing the local bank as retribution for a loan the bank manager Gus Vernon pressured them into, resulting in the Walters family losing their farm when they couldn’t pay the loan back in time.

Al reports that Sam is there to make sure the brothers do not get killed as they did in the original history, but Sam, upon finding out that he is in his own hometown and feeling a kinship with Willie who like Sam left home to better further his education and therefore not being home for his father’s death, decides that he is there to ensure that justice is served and that the Walters family (as well as other families in the town) get their land back from the bank.

Using one of the sympathetic hostages as a distraction, Sam escapes to search Vernon’s house for evidence of his misdeeds but is discovered by Vernon himself while has come home. Sam manages to outsmart him and knock him out, enabling him to get into a safe and discover an agreement between Vernon and a developer with plans for a shopping center to be built on the farmland.

Sam returns with the evidence, but the sheriff informs him that Carl Wilkens, the husband of one of the tellers, snuck into the bank with a gun and a shootout occurred with Willie’s young brother John being shot. Sam convinces the sheriff to let him reason with the older brother Neil, resulting in an end to the ordeal. Al informs him that Vernon become convicted, John turns out fine and recovers from the shooting, but that Neil, after serving jail time, eventually gets out and ends up being murdered during a robbery. Sam however sees his own father walking down the street and runs to talk to him, resulting in the two sharing a hug as Sam leaps.

Beth was played by Elizabeth Dennehy, daughter of actor, Brian Dennehy. She was in American Folk, a handful of Charmed episodes and played Commander Shelby from Star Trek: the Next generation episodes Best of Both Worlds.

Kurt Andon was the photo double for Sam’s dad in the final scene. He also played one of the townspeople of Peoria in the second season episode Good Morning, Peoria.

This episodes unsung hero appearing a Willie Walters is Daniel Engstrom. Besides QL, he was in an episode of Beverly Hills 90210 and a Troma film called Fraternity Demon, descibed as “some college kids accidently unleash a sex demon and she ends up turning a frat party inside out”.

A Tale of Two Sweeties:

Sam leaps into Marty Elroy, a down on his luck serial gambler with another big problem: he married two women and has two kids with each woman. Al reports that Sam’s job is to pick one of the families to remain with while also making sure neither one finds out about the other, a task made even more difficult as he learns that he is also in debt to a bookie who is threatening bodily harm if his money isn’t delivered in the next day.

While Sam and Al try to determine which wife to pick, Sam is pulled to his limits trying to go back and forth between the two. Eventually his shenanigans go too far and both wives throw him out of their houses for the night. Sam returns to each home and has to face both sons who each give him money, knowing their father’s gambling issues and revealing the type of guy Marty is.

When Sam discovers the two wives interacting, unaware of their connection, he manages to separate the two, planning to meet each later in the day. The bookie arrives and seeing as Sam doesn’t have the money owed, prepares for the promised roughing up to commence. Sam makes a last bit gambit and begs him to let him place a bet on a horse race which remarkably pays off and the score is settled with the bookie.

As Sam goes to meet his wives, Al discovers that Sam has arranged for both wives to meet each other, deciding that it wasn’t fair to pick one over the other and that Marty should be exposed for the fraud he is. The wives bond and both decide to dump Marty. Al reports that everyone in the families ends up relatively ok after the experience however, the good news is rained upon as yet ANOTHER woman with two kids shows up, calling out to Marty, her husband, as Sam leaps.

Mary was played by Shay Astar. She also played August in various seasons of Third Rock From The Sun. She has gone on to do various animation voices.

Martin Jr. was played by Michael Bellisario. We saw him in the episodes Camikazi Kid and Play Ball. Also also played a large number of roles across the series Jag. His latest work is called 211; While on a routine patrol, an aging cop, his partner and their ride-along get caught in a standoff with a band of former mercenaries robbing a bank.

This episodes unsung hero is director Christopher Hibbler. He directed Star Light, Star Bright, Temptation Eyes, this episode and one yet to come, Goodbye Norma Jean. He also worked on the shows Matlock, Diagnosis Murder and Tequila & Bonetti. He died in 2010, he was 68.

Next week, Cory & Tom will be discussing “Liberation” & “Dr. Ruth”

We give thanks to some dedicated fan sights. For more information on Quantum Leap, please take the time to check out The Quantum Leap Wiki and Al’s Place.

Do you want to buy this series (from Amazon or iTunes)? Do you want to help support The Rewatch Podcast and the other Golden Spiral Media podcasts? You can do that by clicking this link: https://www.goldenspiralmedia.com/support. We would greatly appreciate it!

Send in your feedback by calling 304-837-2278 or by visiting www.goldenspiralmedia.com/feedback