In episode 14 of Almost Human Podcast we’re giving our full review of the 10th episode of Almost Human entitled, “Perception.” In our review we discuss the issues with John’s memory, Insyndicate, Anna, and speculate on the story path for the remainder of the season. We also discuss how this episode was originally planned to air as the 4th episode of the series and reveal if we thought it worked better as the 10th episode or would have preferred to see it as the 4th episode.

We talk about the relationship between John and Dorian, Valerie as a Chrome, whether or not we’ll see Chromes pop up in the story again, and speculate on why John’s father was mentioned by the internal affairs agent. Of course, we also discuss the plot and various characters that were woven into the story, and the various pieces of technology that were shown in the episode.

Here are the 3 images of the wall that appeared in the Almost Human Pilot: (CLICK TO ENLARGE)

Here are the images of the digital post-it notes in John’s home: (CLICK TO ENLARGE) 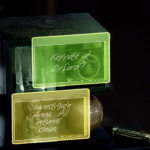 Send in your thoughts on each episode by calling the Golden Spiral Media voice feedback line at 304-837-2278 or email us at feedback@goldenspiralmedia.com.