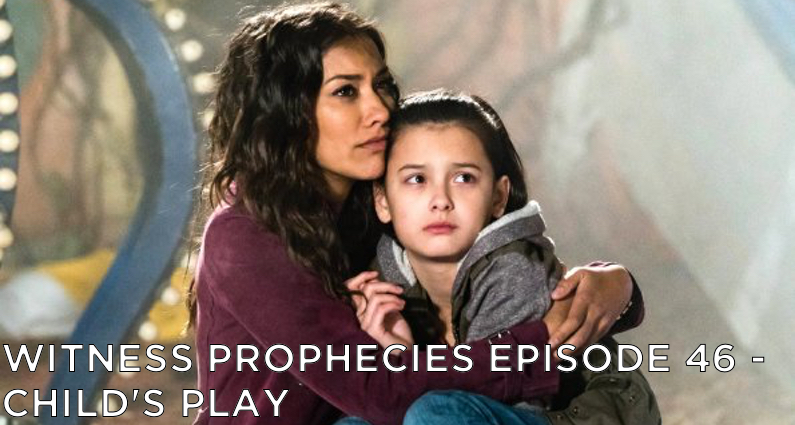 Molly Thomas has been struggling with her new role as a Witness and what that means, so her mother, Diana, takes her to the Vault as a treat.  Jake Wells, Alex Norwood, and Ichabod Crane are delighted to share what they know with young Molly, who is mesmerized.  She’s part of a secret club!  As she and Crane yell into the tunnels so they can hear their voices echo, a special security system for the Vault activates, trapping the two of them inside, as a monster roars to life below them.  The monster is Mr. Stitch (played by Sleepy Hollow “monster actor” Derek Mears, who has also portrayed the Kindred,  Moloch, Head Berserker and the Golem), a golem that has taken on the appearance of Molly’s childhood imaginary friend.  Mr. Stitch plays to protect Molly from anyone who has upset Molly, and the first person on her list is her art teacher, Mr. David (played by Michael Scialabba).  Fortunately, Mr. Stitch doesn’t kill anyone in this episode!

Diana, Jake, and Alex discover that a former Agency 355 employee, Claudia Russell (played by Claire Byrne), installed the additional security and Diana and Jake head out to find her.  They discover that she has died, but they find a videotape Claudia made speaking of someone named Michael, and demons.  In Claudia’s documents are instructions that can free Molly and Crane from the Vault.   Molly fits through the ducts, but one of the three levers is stuck, and the Vault remains sealed.  Much to Crane’s horror, Molly decides to find another way out of the tunnels.  As she exits, Malcolm Dreyfuss is there to introduce himself to her and let her know he is there for her. He leaves and Jake and Alex find Molly.

Meanwhile, Jenny Mills and Diana are attacked by Mr. Stitch at the Thomas home, but manage to barricade themselves inside.  They go to an abandoned amusement park that Molly used to draw, to perform a spell that should eliminate the golem. 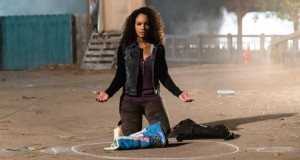 They are attacked, and Molly, Jake, and Alex arrive just in time.  Molly tells Mr. Stitch to stop, and Jenny finishes the spell.  Molly watches as Mr. Stitch disappears.  What was interesting is that although Jenny said that Mr. Stitch arose from Molly’s “Id,” and that Molly had no control over it, Molly did exert control over Mr. Stitch at the abandoned amusement park, telling him to stop.  It isn’t child’s play for Molly any longer – she is beginning to deal with the responsibilities that come from being a Witness. 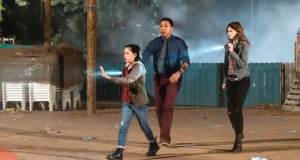 She is so young to learn this lesson, but she is really only a year or two younger than Abbie and Jenny when they first saw the demons.  Abbie didn’t know she was a Witness, but the supernatural entered her life early.  Molly would not have known if Crane hadn’t sought her out.  Of course, Molly would not have been a Witness if Abbie were still alive…

Malcolm is closing Dreyfuss Industries, as Jobe listens to his plans to focus on his future.  Jobe is ready to get the second recruit.  Dreyfuss has seen Molly in his visions, and he believes he could be a real father to her. 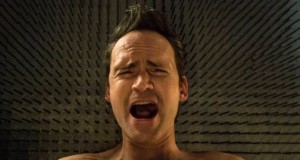 Dreyfuss went to some strange and perhaps sick lengths to “improve” his visions.  He lay on a bed of nails and had Jobe hit him with a sledgehammer to drive the nails deeper into his back.  Yes, that’s sick.  But what was creepy was his vision of Molly sketching him, giggling, and thanking Dreyfuss.  Was Molly thanking him for becoming a father to her?  We have to keep in mind that these are Dreyfuss’s visions – ones that he wants for his future.  This may be child’s play on his part – he is using his imagination to conjure the vision of a future he wants, as Molly had her imaginary friend from childhood. But her visions of Crane are likely related to her gift of vision as an oracle, as the Singing Bowl called out to her in the last episode.  Molly’s relationship with her mother and with Crane, as well as the rest of Team Witness, will be key in keeping her away from Dreyfuss and his child’s play.

Who is the next recruit, and what evil plans does Dreyfuss have in store for Molly?

History Lesson of the Week – Sacagawea

Sacagawea was a Shoshone interpreter best known for serving as a member of the Lewis and Clark expedition into the American West—and for being the only woman on the famous excursion.

She was born in Lemhi County, Idaho, the daughter of a Shoshone chief. When she was about 12 years old, Sacagawea was captured by Hidatsa Indians, an enemy of the Shoshones. She was later sold to a French-Canadian trapper named Toussaint Charbonneau who made her one of his wives.

Sacagawea and her husband lived among the Hidatsa and Mandan Indians in the upper Missouri River area (present-day North Dakota). In November 1804, an expedition led by Meriwether Lewis and William Clark entered the area. Often called the Corps of Discovery, the expedition planned to explore newly acquired western lands and find a route to the Pacific Ocean. The group built Fort Mandan, and elected to stay there for the winter. Lewis and Clark met Charbonneau and quickly hired him to serve as interpreter on their expedition. Even though she was pregnant with her first child, Sacagawea was chosen to accompany them on their mission. Lewis and Clark believed that her knowledge of the Shoshone language would help them later in their journey.

In February 1805, Sacagawea gave birth to a son. Despite traveling with a newborn child during the trek, Sacagawea proved to be helpful in many ways. She was skilled at finding edible plants. When a boat she was riding on capsized, she was able to save some of its cargo, including important documents and supplies. She also served as a symbol of peace – a group traveling with a woman and a child were treated with less suspicion than a group of men alone.

In 1809, it is believed that Sacagawea and her husband traveled with their son to St. Louis to see Clark. It is believed their son remained in the care of Clark’s family.  Sacagawea gave birth to her second child, a daughter named Lisette, three years later. Only a few months after her daughter’s arrival, she reportedly died at Fort Manuel in what is now Kenel, South Dakota, around 1812.  After Sacagawea’s death, Clark cared for both children, and ultimately took custody of them.

SleepyHeads!  Who is the next recruit, and what evil plans does Dreyfuss have in store for Molly?  Tune in next week to find out!

And SleepyHeads – don’t forget about the book, Sleepy Hollow – Creating Heroes, Demons & Monsters, by Tara Bennett and Paul Terry.  You can order it on Amazon, by using the Golden Spiral Media link.

SleepyHeads!  Look into your crystal balls and let us know your future “prophecies” of events that may occur by sending us your feedback!  Our deadline is 7PM Eastern, on Saturday.  You can use our Feedback page to type an email, record a voicemail, or upload an audio file, or call 304-837-2278.  We’d love to hear from you!  And while you’re at it, why not take a few minutes to leave a rating and review in iTunes?