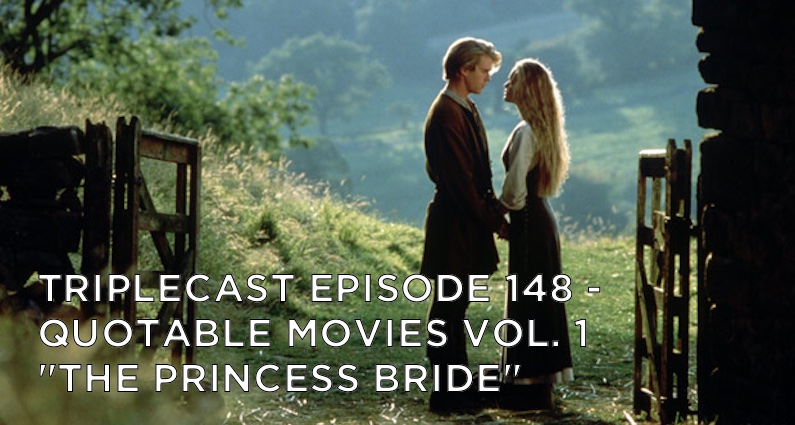 The Princess Bride is one of those movies you LOVE to quote! That is why it is kicking off Triplecast’s Quotable Movies Vol. 1. Cory and John are joined by Karen for this one. “Surender! You mean you wish to surrender to me? Very well, I accept.” Inconceivable! 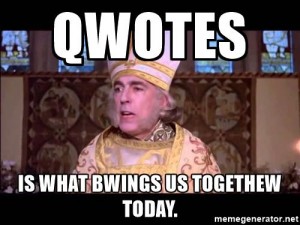 This movie is a story with in a story.  The Grandson, Fred Savage, is at home sick and The Grandfather comes to cheer him up by reading a story.  The story is The Princes Bride.  In the story we have Wesley, Cary Elwes, as a farm hand in love with Buttercup, Robin Wright, but she doesn’t seem to return his affections at first.  But they fall in love. Wesley leaves to seek his fortune and his ship is attacked and he is presumed dead and but really he has been is captured by the Dread Pirate Roberts. Things are not going well for Buttercup either. Prince Humperdinck, Chris Sarandon, is looking for a bride and finds Buttercup. He will have her at all costs. But Humperdinck has enemies and people want to make a buck.

We have Vizzini, Wallace Shawn, the brains, Inigo Montoya, Mandy Patinkin, the sword, and the brute squad Fezzik, Andre the Giant tasked with kidnapping the princess, killing her and starting a war with Gilder. They have the Princess but are being followed by the Man in Black. He engages Inigo in a sword duel.  He learns that Inigo is out to kill the six fingered man Count Rugen, Christopher Guest, who killed his father. The Man In Black a,k.a. Dread Pirate Roberts defeats but does not kill Inigo. Roberts then faces Fezzik in hand to hand combat. Fezzik is a lovable guy just looking for friends. But he cannot win against Roberts choke hold. Finally Roberts has a battle of the wills against Vizzini. But Vizzini’s wits are no match for Roberts.

Prince Humperdinck is on the trail of Buttercup. Buttercup knows the reputation of Roberts and says she does not love Humperdinck but hates Roberts for killing Westley. Roberts accuses her of being unfaithful by moving on. She pushes Roberts down the hill and he says “As you wish.” She knows it is Westley and follows him.  They are forced into the fire swamp. As they face the poping flames, lightening sand and ROUS, they learn what happened to each other over the 5 years and re-kindle love. Westley is the new, new, new Dread Pirate Roberts and his ship is waiting for them. But Humperdinck and Rugen are waiting. Buttercup makes a deal. Let Westley go and I’ll marry you.

Rugen takes Westley to the Pit of Despair to torture him. The Princess Bride is miserable and demands Humperdinck free her to love Westley or she will kill herself. He makes a plan to get her to marry him. He will then kill her and blame Gilder to start the war. He payed Vizzini to do it in the first place.  Inigo and Fezzik reunited and need Westley to help them get in the castle.  Humperdinck sucks 50 years from Westey. It would take a miricle to save him.  So Inigo and Fezzik take him to Miracle Max & Valerie, Billy Crystal & Carol Kane. True love is worthy of a miracle.

The trio scout out the castle and then Westley comes up with a plan.  They scare off the men guarding the gate, get the key and make it in.  Inigo duels and defeats Rugen. Westley is reunited with Buttercup and defeats Humperdinck without one sword stroke. They lived happily after after including the grandson who now loves the story, even the kissing parts.

The Princess Bride was perfectly cast and well acted. It stands the test of time because it is a romantic fairytale.  The characters and actors shine in this story.  I don’t know if they knew how special the story would be when they were filming but they know know.  This movie was gret and worthy to kick off the triple.  Thanks to Karen for joining the Princes Bride quote fest.  Check out her other shows on the network Gotham Undercover, Maid of Steel, and Remaking History.

The movie score was done by ark Knopfler here is the theme song to the movie “Storybook Love.”

Buy the score here (from Amazon) or on iTunes.

The clue this week was:  Starting at The Princess Bride and Cary Elwes. Cary co-starred in this 1997 comedy with Jim Carrey.
Which lead us to the following movie:  The movie is  “Liar Liar.”

Do you want to buy this movie (from Amazon or iTunes)? Do you want to help support Triplecast and the other Golden Spiral Media podcasts?  You can do that by clicking this link: https://www.goldenspiralmedia.com/support.  We would greatly appreciate it!

Send in your Triplecast ideas, thoughts, memories and feedback by calling 304-837-2278 or by visiting www.goldenspiralmedia.com/feedback