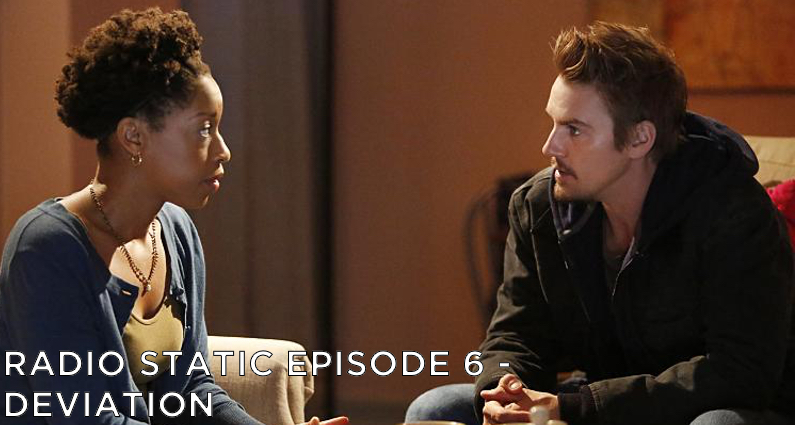 Hello, Freqs!  This week on Radio Static, we discuss the Frequency Season 1 Episode 6,  Deviation, which originally aired on November 9, 2016.  Raimy meets Karl, who can speak to himself in the future, and the Nightingale plays mind games with both Frank and Raimy.

Raimy Sullivan knows who the next victim of the Nightingale Killer will be and when it will happen.  She shares this information with her father, Frank, in his 1996 timeline, and he must work hard to convince Satch Rayna (Mekhi Phifer) that Amanda Baldwin (played by Amber Friendly) is being stalked by this killer.  The police follow her, but the Nightingale doesn’t attack her and Satch thinks the operation was for naught.  Frank decides to warn Amanda, despite the protestations of his daughter that this could once again put the Butterfly Effect into play, changing even more events in the future.

Raimy was right.  As Frank talks to Amanda, he hears something in her house and after sending her outside to safety, he is attacked by the Nightingale.  Alive but battered, Frank realizes something is missing from his wallet.   Meanwhile in 2016, Raimy sees the computer once again change and is relieved to see that Amanda was rescued and now lives in India, helping children.  However she is called to a crime scene – and it’s Amanda, dead at the hands of the Nightingale and a clip of a news interview playing over and over – with Raimy telling news reporters that she will get justice for the Nightingale’s victims.  Frank believes the Nightingale is playing with her as he did with Frank 20 years earlier.  Clutched in Amanda’s hands is the picture of Frank, Julie, and young Raimy that the Nightingale took from Frank at Amanda’s home, all those years ago.

It seems that Frank warning Amanda has changed events again and now the Nightingale has a new person to play mind games with and perhaps attack – Raimy.  Raimy was only a child when the Nightingale took her mother, Julie, and Frank has placed Raimy in his sights by pursuing and attempting to thwart him in the 1996 timeline.

But this also raises another question – will fate catch up with you regardless of how your timeline might change?  Amanda died in the original timeline before the Nightingale was caught, and she died in 2016.  Was this her fate, her destiny?  Does this mean that fate will correct itself and Frank will die?

And what does this mean for Raimy?  Will she somehow find love again with Daniel?  Our humor this week seemed to be found in Raimy’s love life and her father realizing over the ham radio that his daughter had a “sleep over.”  Who should appear in the kitchen making breakfast and looking through Raimy’s utensils but Kyle Mosbey, aka Detective “Hot Stuff”  (Rob Mayes).  While

Raimy clearly enjoyed her evening, morning had her fleeing for the subway where she ran into none other than Daniel Lawrence (Daniel Bonjour).  It would seem that Raimy is beginning to ponder fate and destiny, as she asks Daniel if he believes in “kismet.”  He still thinks she could be a stalker, but when he sees her outside Amanda’s home (the crime scene), he begins to ponder this as well, albeit without the pre-Butterfly Effect memories of their time together.  These two will need to begin from scratch, and Raimy still has hope that fate will be kind.

Speaking of starting over, Julie appears to warm up to Frank after the near kidnapping of Amanda, and wants him to stay close at the house guarding them because she trusts him.  Yet Stan Moreno (Anthony Ruiviar) may help erode that trust, as we learn he has pictures taken of Frank and another woman during Frank’s time as an undercover narc.  Is this how Stan prevented Frank from disclosing Stan’s drug business for so many years – common blackmail?

Finally, we began to get both answers and more questions to the mythology of the ham radio and how Frank and Raimy can communicate despite being separated by 20 years.  Raimy is sent to a prison where she meets the murderer, Karl Pierce (played by Curtis Armstrong).  He claims to be able to talk to himself in the future using a contraption that looks just like Frank and Raimy’s ham radio.  Karl mentions Quantum Physics, says that time is infinite, and explains that the past, present, and future all exist at once.  He also tells her that the Nightingale is like a tree and his victims are branches – that you can saw off one branch but there are other branches (victims) further up the tree.  The only way to get rid of the Nightingale Killer is to cut off the trunk – to kill him.  And with that, Raimy tells her father that he must kill the Nightingale, and he says that he is a cop –  not a killer.

What is Deviation, as referenced in this week’s title?  Frequency Deviation is used in FM radio to describe the difference between an FM modulated frequency and the nominal carrier frequency.  The purpose of the carrier wave, carrier signal, or just carrier, is to either transmit the information through space or to allow several carriers at different frequencies to share a common physical transmission medium (such as a cable TV system).  The frequency deviation of a radio is importance in relation to bandwidth, because less deviation means that more channels can fit into the same amount of frequency spectrum.

We have Karl Pierce as our carrier – he is sharing information with Raimy and with himself, through what appears to be a common device – the ham radio.  Less deviation means that more channels will be in the spectrum.  Does this mean that as the Butterfly Effect broadens, we will see more “Karls,” that can talk to themselves in the future?  Is this a hint that Satch, Gordo, Daniel, and others may ultimately have their memories unlocked – between past and present?  Or are there already others out there with these memories?  Or as the deviation increases, is it less likely that these past memories will resurface?

Will Frank kill the Nighingale?  Will he be pushed to do something against his core beliefs in order to save his family?  Will he become like Karl?

Tune in next week to find out, Freqs!

Fire up your ham radios, and transmit your feedback to us, Freqs! Our deadline is 7:00pm Eastern, on Thursday!  Use our Feedback page to type an email, record a voicemail, or upload an audio file, or call 304-837-2278.  We’d love to hear from you!  We will also give you a question each week about the episode – ask for your theories and thoughts – and you can reply on Twitter using #RadioStaticGSM. So watch for that the morning after Frequency airs!  And while you’re at it, why not take a few minutes to leave a rating and review in iTunes?