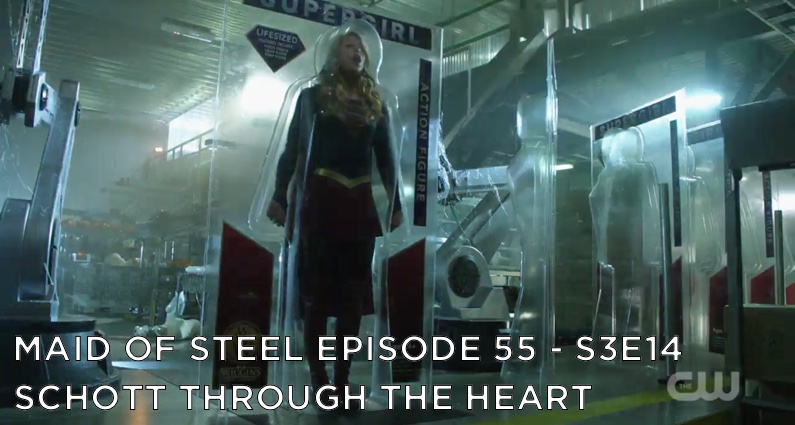 A return from a Legendary hiatus, “Schott Through The Heart” took a deep dive into the family life (and death) of the Schott’s. Dear ‘ole Dad (“The Bastard”) always wanted to go out with a bang and so he did. Winn deals with the emotional return of his mom, Alex deals with an emotional M’yrnn J’onzz who is beginning to deal with Martian Memory Loss, and Mon-El deals with the emotional fallout of Imra (and Brainiac *never trust the AI, folks*) lying to him about the true nature of their mission (not really an accident) to this time period. So many emotional emotions…

You thought your family was dysfunctional:

Winn is dealing with the fallout of his father passing away and never coming to terms with him.  Then re-enters Mom after 20 years.  Mary explains that she had to stay away because Winn Sr. threatened her by stating he would not kill her, but Winn Jr. instead.  After very tense reintroductions Mary and Winn start to find common ground (with Kara’s help) over stopping a group of mechanical flying monkeys, yes-you heard me.  Kara and James Olson save the day while Mom and son work together to find out who might be behind the attack and why Winn Sr. is still after Mary, even from the grave.  Their search leads them to a janitor at the prison where Winn Sr. was that became his acolyte and convinced to carry out his last wish, to kill Mary.  Kara, Mon-El, James, and Winn come to her rescue.  After fighting off some really cool toy traps and tricks the team prevails and puts the new ToyWoman back in the toy box.  Even better, Winn knows he doesn’t need Mom around but instead he wants to pursue a new relationship with her.

J’onn is now part of the Sandwich Generation: 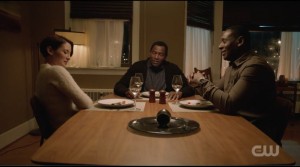 After some not so subtle prodding from Alex, M’yrnn and J’onn invite her over for a house warming dinner.  While there M’yrnn makes a few slips including forgetting his Martian grandchildren.  Alex picks up that he might be losing his memory and he knows she’s right.  He becomes angry and demands she leave while J’onn wonders what is happening.  She keeps her word not to say anything about M’yrnn to J’onn and eventually M’yrnn does confess his condition to his son.  They both see the difficult road ahead and this was the strongest piece of this episode to me.  Carl Lumbly is an inspired choice for M’yrnn and any time he is given the opportunity to shine he certainly does.

Mon-El and James need to unload their…problems Through the Heart:

James Olsen has a balanced, adult, dare I say pretty amazing outing this episode.  He is there for his friend, he fights alongside his superhero friend, and is trying to find his new flame Lena but is unsuccessful throughout much of the episode.  And he handles that like a reasonable adult.  Way to go, James!  Meanwhile, Mon-El also needs to share with Kara what Imra shared with him (apparently off-screen) since our last episode.  It seems that The Legion’s being in this time period is no mere accident, it was planned.  Dun, dun, duuuuuuuuuuuuuunnnnnn!  Why you ask?  Well, it seems they need to take down the last of the Worldkillers, Pestilence, because 1,000 years from now she becomes the dreaded Blight.  That’s it.  That’s the whole story.  No, for real.  Anywho, Kara does an amazing job of laying  down the line that Mon-El does not need to share his relationship troubles with her because it’s inappropriate and, to be fair, he gets it and doesn’t try to cross the line.  He also takes down a really cool life-size T-Rex toy with some nearby cloth so he says he can help her learn cape tricks that he’s learned over the time since he has been with the Legion.  Yeah, cape tricks.  That’s all.  Really. 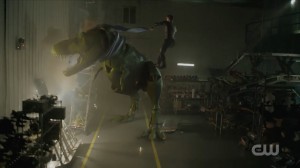 Speculation of the Week: 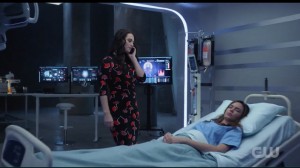 Schott Through the Heart has the unfortunate position of being the first episode back after more than two months that left us hanging on the progression of the Worldkillers, the fate of Samantha, and the lying Imra and Brainiac.  The answer to the lie was…unsatisfying.  This episode was also clearly a “filler” in terms of the overall arc of Season 3.  It’s not its fault and there were some great moments especially from Winn, J’onn, Alex, and M’yrnn.  Other parts of this episode fell flat.  It happens.  It just didn’t need to happen coming out of such a long break.  Let’s hope the CW expansion into Sunday nights helps rectify these kinds of situations.

We want you to be part of the podcast! After a new episode airs, head over to our feedback page and drop us a quick line, or record a short voicemail, reacting to the events of the episode. What was interesting to you? What stood out? What did the episode do well or, perhaps, what did it not do well? We rely on your input to help round out our conversation and anticipate the opportunity to include your thoughts and theories!