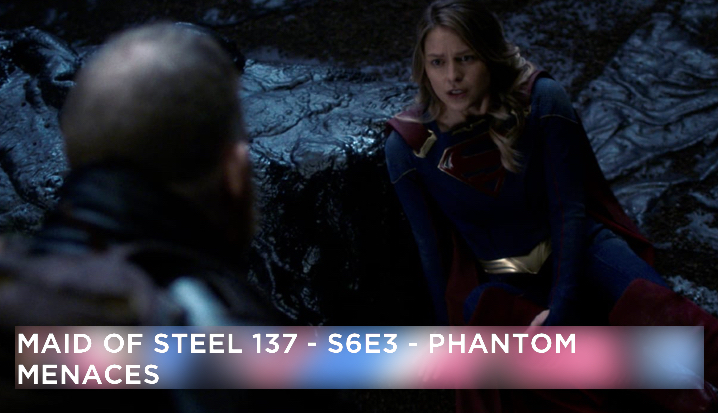 When a phantom escaped into the city I was sure our biggest problem would be doubt and despair. The reality is much worse. These aliens also inject venom into their victim’s body. After a short incubation period the victim is transformed into a phantom. They steal your soul and enslave you. Brainy says they had done this on many planets before the Kryptonians sent them to their newly created prison world. Supergirl is still trapped in the Phantom Zone which is now fractured into innumerable pieces. The super friends must protect the city and save her. Their biggest challenge is not losing hope in Kara’s absence. 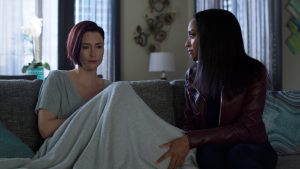 The legal system failed to punish Lex Luthor but Lena and Brainy are working together to seek vengeance. Lena locks Lex out of all accounts including the Lex Foundation. This organization is only a front to funnel money to Kaznia for weapons. Brainy is able to reroute the balance of the account to the Luthor Children’s Wing of National City Hospital. Lex quickly strikes back telling the media that Lena is to blame for a fire at the facility that was actually set by Otis. Lena’s soul will never survive as a member of this backstabbing family. She will be her own hero and abdicate the throne of a company whose values she does not support. She does not need the Luthor fortune. With her brilliant mind, Lena will succeed all on her own. She will leave her family behind and surround herself with her super friends. They are a family she is building for herself. 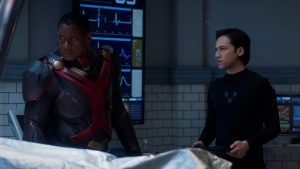 Meanwhile Kara and her father’s attempt to catch a ride with a phantom out of the dark place fails. Supergirl is forcefully propelled backwards injuring her leg. Some criminals take her father captive to feed him to a monster in a lake. Kara receives some unexpected help from a being from another dimension. In conversation Kara learns that they have a mutual friend in Mxyzptik. She is Nyxly, a princess of the fifth dimension, whose father banished her here. After a speech from our Paragon of Hope, Nyxly uses the last spark in her magical orb to break her magical shackles and restore her power. She in turn uses that power to heal Kara. 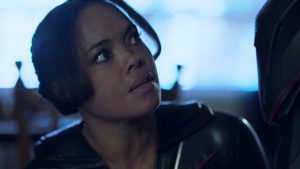 On Earth M’gann defies J’onn’s orders and goes on patrol alone. She is attacked by a phantom and has to be rushed back to the tower for treatment. Because of the Martian ritual that she and J’onn performed just days before, a piece of M’gann’s soul resides in J’onn. They hope this will be enough to save her since it is the stealing of the soul that leads to the transformation.

Back in the Phantom Zone Kara wonders if Nyxly’s newly restored magic can save them all from eternity in this dark place. Only time will tell if this plan will work. Until then I am your eye in the sky Green Butterfly wishing you a super week! 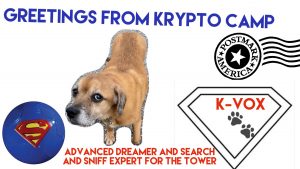 “THE TERROR BEYOND TWILIGHT!” General Zod and his allies toss Supergirl into the disintegration pit and leave, but Supergirl barely saves herself by reviving in time and digging her fingers into the side of the pit’s wall, then drags herself out of the pit and collapses. Meanwhile, Superman and Charlie Kweskill penetrate various lower (or higher) levels of the Phantom Zone, encountering an alternating yellow-and-red sun (which Superman had once seen while racing with the Flash), battling monsters and encountering weird “Priestesses of the Crimson Sun.” Finally, they meet Thul-Kar, a Kryptonian wizard, who tells them he believed Jor-El’s prophecy of Krypton’s doom and entered the Phantom Zone by magic.

Season 6 – Episode 4: “Lost Souls” SUPERGIRL FINDS A WAY HOME – Supergirl finds an opportunity to escape from the Phantom Zone but it comes with some dangerous strings attached. Meanwhile, Lena joins the Super Friends on a mission but finds she disagrees with their plan of action against the Phantoms and wonders if she is truly ready to be a part of the team. Alysse Leite-Rogers directed the episode written by Karen E. Maser & Nicki Holcomb (#604). Original airdate 4/20/2021.

Get your feedback in to us by April 22 at 7pm EDT to be included in the podcast. Thanks!

Will the show use Kara's time in the phantom zone to jump the main story line forward in time?