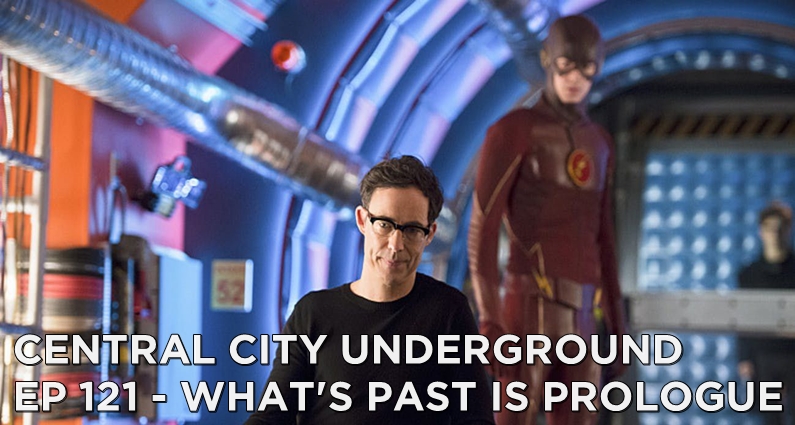 [sc:ccutop]
Welcome once again Undergrounders! Unfortunately, I was not able to join you this week. Fear not! The Professor has everything under control! He’s gonna talk about “What’s past is prologue”. Join him as he reviews the 100th episode of our favorite show about our favorite Speedster!

Talking about a prologue, sheesh. Barry and Nora time travel to gather items needed to stop Cicada; a highly magnetic alloy from Savitar’s armor, Harry Wells’ Speed Force transmitter, and dark matter. They first travel to Team Flash’s final battle with Savitar. After a Time Wraith appears, Barry distracts it so Nora can retrieve a piece of the armor. They next travel to when Zoom stole Barry’s speed for the transmitter, which Barry obtains from Harry. Zoom discovers Barry and Nora and gives chase before he is stopped by the Time Wraith; though this breaks the transmitter in the process. Even though he is reluctant, Nora convinces Barry to ask Thawne for help. Despite some initial difficulty, Barry convinces Thawne to fix the transmitter by claiming he will never get home if he does not. Finally, Barry and Nora travel to the night of the particle accelerator explosion. In the Time Vault, Gideon reroutes part of the dark matter through the shard and transmitter, and Barry reveals to Nora that Thawne killed his mother. Back in the present, Team Flash separates Cicada from his dagger temporarily before he escapes. Nora returns to 2049 to confront Eobard at Iron Heights.
*excerpt from Flash Wiki