Habeas Corpus helped us start the decent into the mysteries of Castle Rock. Dale has a mission from God to save the Rock. Henry sees how much the town has changed. Molly is tied into it all in ways even her family cannot understand. Will we make it out alive and sane?

Dale Lacy grew up in the Rock and has seen the evil overrun the town. In high school he survived a bad tackle in a football game, but his brother jumped off the roof of the school in full mascot costume. Through the years Dale saw the events in the town tear the people down. Even his own home was the location for multiple murders. His faith in God was stretched to the limit. He wanted a way to stop the evil in the Rock. He waited and listened and finally God gave him an answer. He built the cage in the abandoned cell block. Then God told him where to find the Devil and he locked him in that cage.

We know from the seeing President George H.W. Bush on the TV speaking about the gulf war and from the missing poster for Henry, that the capture of the Kid happened at the time of Henry’s lost time and his father’s death. The Kid has been in that cage for close to thirty years. Has he aged? We don’t know. We don’t know Dale’s motivation for killing himself, but he did leave a note. That note was for Alan. The note turns out to be the voice over we have been hearing all episode was this letter. Dale knows that Alan is not sheriff anymore but is still a defender for Castle Rock.

Alan seeks out Warden Porter (Ann Cusack) at a hotel bar in Augusta. She drives over 60 miles to get away from Shawshank. Alan strikes up a conversation saying he was in law enforcement and that they are naming a bridge after him. She is about to leave when he brings up Dale. He shares a bit about Dale solving the Rock’s problems by capturing the Kid. He tells her not to let him go and then leaves.

Porter and her assistant check out the cage again and she gives her consent to Reeves to have the Kid killed. Reeves puts the Kid in a one bunk cell with a neo-Nazi skinhead. The Kid is quiet but it is still bugging the inmate. He walks up to the Kid and the Kid whispers, “You don’t want to touch me.” The next day it is not the Kid who is dead, it is the other inmate. Porter and Reeves check with the prison doctor. She says he was riddled with cancer and she is surprised he even was able to walk into prison.

Henry quickly discovers how bad things have gotten in the Rock. He goes to Martha Lacy (Francis Conroy) to see if he can find out anything about the Kid. She is blind, which I missed in the short interaction we saw in episode 1. She assumes he works for the Northeast Corrections at first. Then he clears it up. She get’s a call and Henry checks out Dale’s home office. He finds a huge folder of news clippings cataloging the things wrong with Castle Rock. He then finds a drawer full of Bible scripture of the day tear off calendars. Dale put them in the drawer when they get to Acts 16 32 where it talks about the jailer and his whole family being saved and baptized. He is stopped when Martha asks if he is black. When she finds he is Henry she kicks him out. Not before he asks what is in the padlocked basement.

Henry goes to his father’s old church. There, the members of the congregation are taking prayer partners at Shawshank. Jackie Torrence (Lane Levy) volunteers to take the mass murderer. They go to visit them and hold service at the prison chapel on Sundays. Henry asks the Pastor (Aaron Staton) about Dale. He says Dale didn’t attend anymore. He dropped Martha off and had his church in the woods. The pastor sees Henry’s life of defending prisoners as an act of redemption because of his past.

Henry goes to the Mellow Tiger, a bar, restaurant, and duck pin bowling alley. He knows the Shawshank guards go there after shift. He is waiting on Dennis Zalewski, who he knows by sight not name. When Dennis comes in he gives the bartender a note to give to Dennis. But before then, he finds out Nan’s Luncheonette has closed. Jackie comes in and gives him the unofficial and official story. Nan ran a sex club in the back, needed money and blackmailed a Maine official. They had it shut down. Officially she packed it in after Castle Rock voted to incorporate 2-3 years ago.

Later, Henry meets with Dennis in his car out in front of the Deaver house. Henry wants to file a rit of Habeas Corpus and get Dennis to testify. Dennis says no he cannot lose his job with his wife a month out from delivery. Plus we see that the events at the end of last episode were a mind trick played on Dennis and he almost shot a co-worker. It seems that Henry has been put on a no go list and the Kid has been put in general population. The only way to see him would be an act of God and that gives Henry an idea. He takes the bus in with the congregation on Sunday for their service. Afterwards. Dennis puts the Kid out so he and Henry can connect. They do briefly before the Kid is taken back to his cell.

Molly Strand is an interesting person. We see her staring out a window and see that she is right across the street from the Deaver home. We flashback to her childhood and see she and Henry signal each other with lights and wave. She is obsessed with Him, writing his name over and over in a notebook. The night of his disappearance, Deputy Ridgewick comes and tells her that Henry’s dad is barely alive after they found him at Castle Bluffs (this contradicts the story Henry tells Jackie). He asks if she knows where Henry might be or if he wanted to hurt his dad. She says no. She has been talking under her comforter the whole time and after Ridgewick and her mom leave she pokes her head out and her breath is visible like she has been out in the cold.

Back in present day we see Molly meet her sister in the Mellow Tiger. Molly wants to revitalize the town she needs the equity in their parent’s house to buy the yarn mill to do that. She asks for her sister’s permission, but the sister says no. Molly has forged her signature and put in the paperwork already. She is going on Local Color (TV show) next week to promote it. Sister brings up her social anxiety. Molly says it is psychic ability and she takes a little medication not for the anxiety but to quiet people’s voices in her head.

In this episode we saw news paper clippings and heard Dale’s voice over. The events of Cujo, Needful Things, The Dead Zone and The Body were all referenced in this episode. But even the opening credits were filled with references to many of King’s works. We even have a character name Jackie Torrence. Is she related to The Torrence family from The Shining and Doctor Sleep? Who knows! But since The Mellow Tiger Bar and Nan’s Luncheonette were mentioned our featured connection this week will be Needful Things. 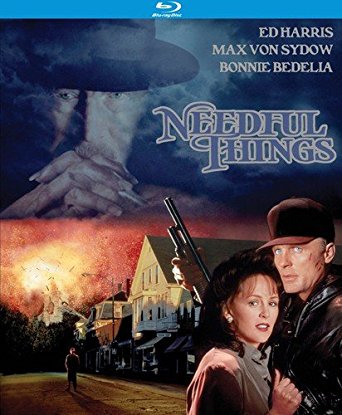 Check out the movie from Amazon or iTunes.

Here is a link to the Book and Audiobook

Habeas Corpus blew me away. I loved the first episode’s mythology, but this one we dove into and it was amazing. I can really see why Hulu released the first three episodes at once. This episode hooked me hard. How is Molly connected to Henry. Did she cause his dad’s death and cause Henry’s memory loss of everything before the accident? Was the Kid responsible for the accident and disappearance? Was that where Dale found the Kid. Was the boy we saw last week in Henry’s flashback actually the Kid? Was the trauma of her husband’s death and Henry’s disappearance the start of Ruth’s memory issues? Was Alan an unknowing party to Dale keeping the Kid? Habeas Corpus gave us so many questions!

So here is what we have about episodes three and four.

Episode 3 Local Color:  The past catches up with Molly Strand.
Episode 4 The Box:  Henry prepares for his day in court; a coffin arrives in Castle Rock.

What did you think of “Habeas Corpus”? What King Connections did you spot in the episode? What theories do you have about the show? Be sure to join our facebook group and get updates on upcoming shows!

You can get a free 30 day trial of Hulu but clicking this link. http://mediavoiceovers.com/Hulu

Please leave us a review and a star rating on Apple Podcasts! They help us improve the show. We appreciate your support!
If you’re in the market for Stephen King books, videos or other merchandise, click on this link and you’ll help support GSM Podcasts.

GSM has a great selection of podcasts about TV, Movies, and life in general.  Check them out here.
You can find  Wayne on the Electric Dreams podcast and Geoff on Gotham Undercover.