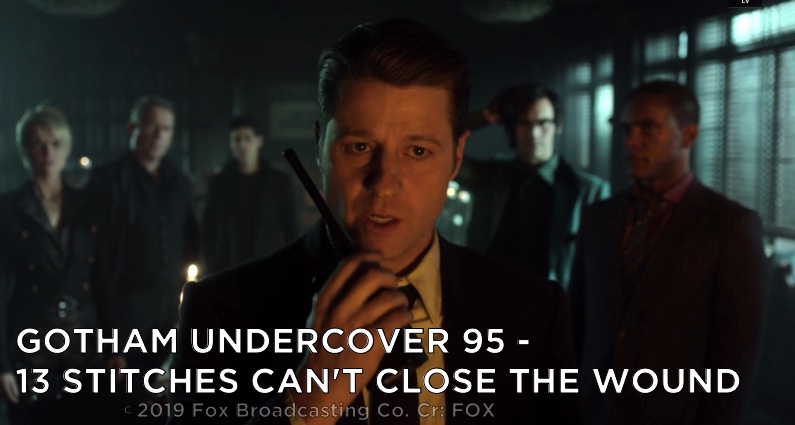 13 Stitches can’t close the wound in Eduardo after his battle with Jim. Magpie’s wound came at the hands of Penguin and Selina. Babs’ wound came from Jim finding Lee. Goodness knows the wound Jeremiah will make using Alfred will be deadly.

The Wound of Broken Relationships: 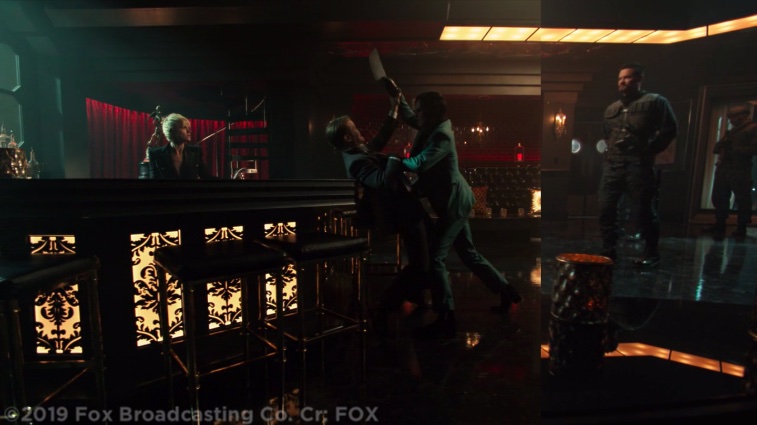 Jim is on the run from Chipped Riddler. They end up in a fight inside an ambulance. Jim gets the upper hand after he shocks Riddler’s brain with the defibrillator. They head to the Sirens Club. Riddler explains that the chip in his head is fried and he wants to help Jim. Babs wants to help as well, but they are interrupted  by Eduardo and the boys. Riddler comes in the room acting like he is still under the chip’s control. He then takes out a soldier and the battle begins. The soldiers are beating back and the trio escapes.

At the Wayne brownstone Lucius Fox removes the chip from Riddler. There is data of all the voice commands from Walker and Eduardo as well as a trace back to them. Bruce has contacts in the press and if they can get the message out things could change. Eduardo has radioed Secretary Theresa Walker (Jamie Murray) for orders. She says she has a way to get to Jim. Eduardo calls Jim and says they can do a trade Edward for Lee. Jim agrees.

Jim heads to Haven for the meetup. Meanwhile Bruce heads the the GCPD rooftop antenna to broadcast the chip’s signal. Fox, Alfred and Babs sneak in the back to gas the place. Riddler in full bomb suit heads in the front to distract the soldiers. Riddler says there is a bomb in his case and the combo is the answer to a riddle about mice. The soldiers are stumped, but Harvey (who has no clue about the plan) pulls out high school knowledge that that rodent is extinct. The soldiers knock down Riddler, but just in time the gas knocks out the soldiers. Bruce gets the message out.

Jim confronts Eduardo and they begin to fight hand to hand. He learns that the group was going to move in earlier but the government saw what Jim had done with Haven and were going to send aid. So they had to blow up Haven to force their hand. Jim hears that after he left the unit, they were captured in Pena Duro and Eduardo was the only survivor. Walker rescued Eduardo. Jim claims she turned him into a killer, but Eduardo say she is the killer. Jim impales Eduardo on rebar and goes to help Lee, but she has taken out the soldier.

Later Walker comes to Haven and says their cover has been blown by the broad cast. She puts a mask on Eduardo and say the Professor Strange will fix him up. All Eduardo cares about is Jim. Walker says that she has a tool for that. She activates the chip in Lee’s head and she starts to attack Jim. Jim electrocutes Lee to fry the chip.

The Partners That Wound Together Stay Together: 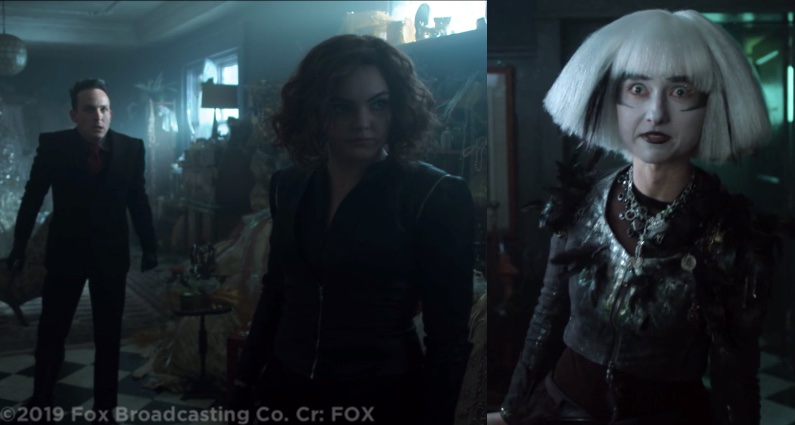 Penguin is back at City Hall when Edward leads him to the treasure vault. It seems that Penguin had it built and stocked by criminals that he then killed so they could not steal from him. But the info got out because he has a visitor. Magpie is a criminal with expensive tastes, but she leaves explosive artifacts in the place of what she takes (see our Comic Corner below). She has stolen a diamond and Penguin is almost blown away by its’ replacement. He knows he needs help to find Magpie. So he turns to Selina. Her reputation for killing Jeremiah has her at the top of the heap of criminals and they are all challenging her. Penguin promises her safety in return for help finding this woman. Selina says “white hair, feathered collar, kind of of resembles a goth chicken?” Yep that is Magpie.

Penguin and Selina track down the treasure trove of Magpie and get some answers out of her before she escapes with a threat of making the place go boom, boom. Selina figures out that all the wealth Penguin has does no good in Gotham, he has to have a way out. She wants to go with him so she can be free and be herself not the killer of Jeremiah. Penguin agrees to a partnership of 10% and a promise not to kill her once on the mainland. Selina breaks them out and they head back to the vault. There they find a wounded Magpie. It seems she is not the only one who likes booby trapped treasures. Penguin ends her and solidifies the power dynamic between he and Selina.

Jeremiah’s Job Requirements Will Wound You: 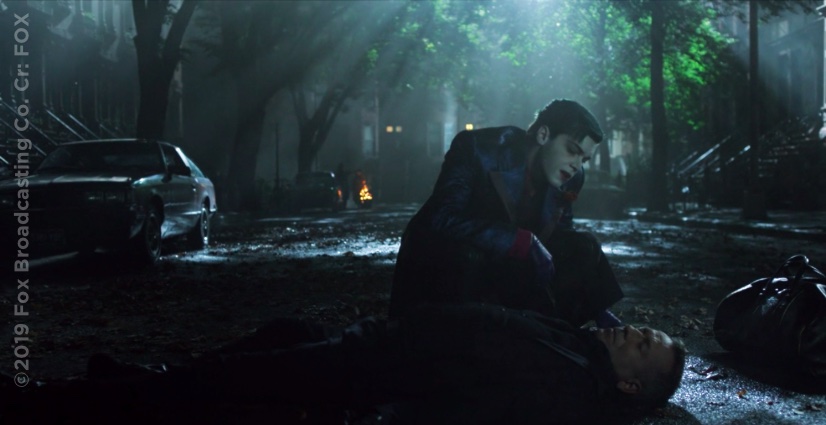 After the action of the day, Alfred heads over to the Wayne Brownstone to get some things for Bruce. On his way out he senses things are not right. Jeremiah pulls a Batman and appears out of nowhere and knocks Alfred out. As he does, he repeats the job add that might have been written by the Wayne’s when looking for a butler. Alfred aways groggily inside Wayne Manor. He asks how Jeremiah got there and he reveals it is by tunnel. It seems that Jeremiah has plans for Bruce and it requires Alfred in addition to the faux Waynes he had the doctor create last episode. Today is the day!

Bonus – Wound To The Heart: 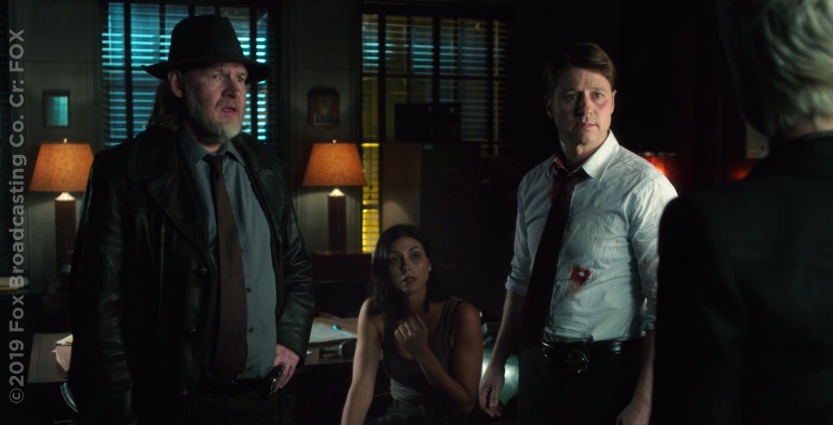 The whole episode Barbara has been trying to help Jim and show him, her help is from the heart. But she sees Jim’s reaction to Lee coming back and is angry. Jim and Harvey are trying to explain what happened to Lee. Babs barges in and Jim wants nothing of her. He reminds him of the sex they had in the office and says that she is pregnant. Saying hello to Lee, she turns and leaves the trio shocked. In the words of Harvey, “congratulations?”

13 Stitches marked the mid-point of our last season of Gotham. Does that wound you like it does me? I’m going to miss this show, but we have been very fortunate to get the great show we have. There was so much going on this week. We saw the beginning of Bane and that scares me, but honestly not as much as Walker in Gotham! Magpie was a fun distraction, but it was a quick run for her on the show. I’m scared for Alfred and Bruce with the plans Jeremiah has for them. Now we have a love triangle between Jim, Lee & Babs and I don’t think any of these 3 will come out without a wound or two! 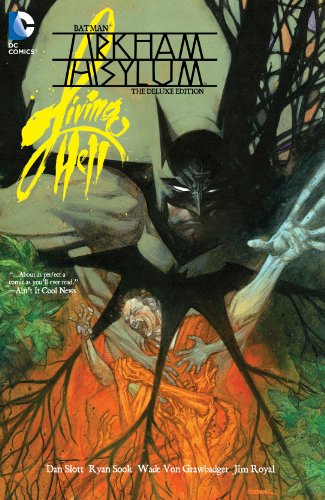 Magpie is a DC villain with a propensity to steal shiny objects and artifacts. She produces weapons with them. She kills off any of her goons that fail her. She is taken down by Batman and Superman. The comic this time is the tale of her, Poison Ivy and others in Arkham.

It is Arkham Asylum: Living Hell: “examines the dark underbelly of Gotham’s notorious “House of Madness!” Warren White, one of Gotham’s most successful financiers, thought he could beat his jail rap by pleading insanity. Now he’s finding out why you don’t cop an insanity plea in Gotham! Expect appearances by Batman, The Joker, Two-Face, Poison Ivy, Killer Croc, and the rest of Arkham’s regulars — plus the debut of several new Rogues!”

Get the deluxe edition from Comixology/Amazon here.

What did you think of “13 Stitches” What was your favorite moment from this episode?
Be sure to join our facebook group and get updates on upcoming shows!

Head over to our feedback page where you can upload an audio file, submit written feedback, or record a voice message on Speak Pipe. As much fun as for the two of us to talk about Gotham, we want your voice to be heard. So please help us in leaving audio feedback.
Have you checked out the other Golden Spiral Media podcasts? Head over to www.goldenspiralmedia.com/podcasts to find other great shows!

Please leave us a review and a star rating on Apple Podcasts! They help us improve the show. We appreciate your support!
If you’re in the market for Gotham or Batman books, videos or other merchandise, click on this link and you’ll help support GSM Podcasts.

GSM has a great selection of podcasts about TV, Movies, and life in general. Check them out here.
Catch Karen on Maid of Steel and Remaking History,Geoff on the Castle Rock Zone, and John on Maid of Steel.