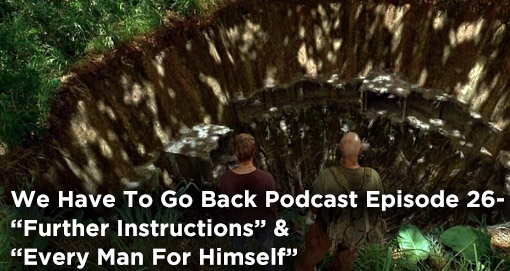 In episode 26 of We Have To Go Back Podcast we take a look back at LOST season 3 episode 3, “Further Instructions” and episode 4, “Every Man For Himself.” In “Further Instructions” we see a flashback with Locke before the crash.  He has joined a commune that secretly grows pot.  John inadvertently brings an undercover cop into the commune, but can’t bring himself to kill the cop because Locke is a farmer, and not a hunter.  On the island we see Locke make a sweat lodge and during a drug induced hallucinogenic state, Boone tells Locke that he must rescue Eko and fix his mistake.  We also meet Nikki and Paulo and learn that Desmond can predict the future.

In “Every Man For Himself” Sawyer is taken captive by Ben and fitted with a pacemaker that will cause his heart to explode if his heart rate gets too high.  By telling Sawyer that Kate will get one too if Sawyer doesn’t behave himself, Sawyer is submissive.  At the end, Ben reveals that the whole thing was just a con to earn Sawyer’s respect and Ben reveals that they are actually on a separate island.  In flashback we learn that Sawyer had a daughter with Cassidy.

Send in your favorite LOST memories and moments by calling 304-837-2278 or emailing us at feedback@goldenspiralmedia.com.