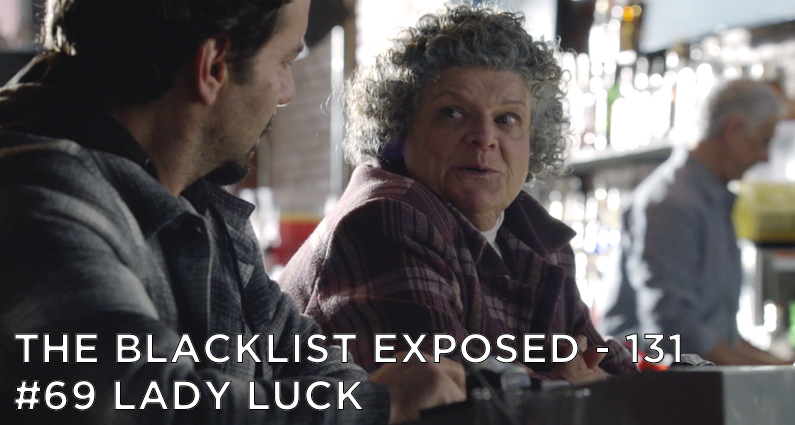 Lady Luck is really a mother who was down on her luck. While she was giving birth to her daughter, her husband went with their son to buy a scratch off ticket which netted them $87 million dollars. Except that on the way back to the hospital, the husband and son were in an accident which left the husband paralyzed and the son, dead. So she makes it her mission to take gamblers off the map, while also making sure their families are taken care of. Lady Luck goes after an associate of Red’s that has infomration on the third estate so the chase is on to stop the execution of this criminal gambler so the task force can get more information on the plot against america.

Elswhere Ressler and MJ from the CIA talk about a woman now in her 80s that was a name on a ferry passenger manifest who move to chicago with her husband and four-legged friends. Turns out that this woman cold very well in fact be Katarina’s Mother. Except Liz didn’t want Ressler digging into things regarding Katarina so now Ressler has to follow up on this lead all on his own.

Be sure to answer our profiling question of the week: Is Katarina’s Mother still alive?? Visit our feedback page to leave a response or call +1 (304) 837-2278. The Music of Lady Luck

Well we know where the music budget went finally the last few episodes. First up as we meet Henry in Atlantic City we hear “My Diary” by 5 Alarm Music. Then as Henry attacks the woman in the tub we hear “Gamblin’ Man” by Lonnie Donegan. As Ned tries to off himself in his garage we hear “My Everything” by Eric Vasquez, Leslie Stevens, Kristen Agee, and Jeff O’Bannon. Then at the end of the episode as Red and Dembe look on from the wings of the stage we are treated to an Acapella version of “Every Breath You Take” from The Police. Fun fact that they had to get the rights from Sting and John Bissell actually worked with the choir for the track we hear in the show.