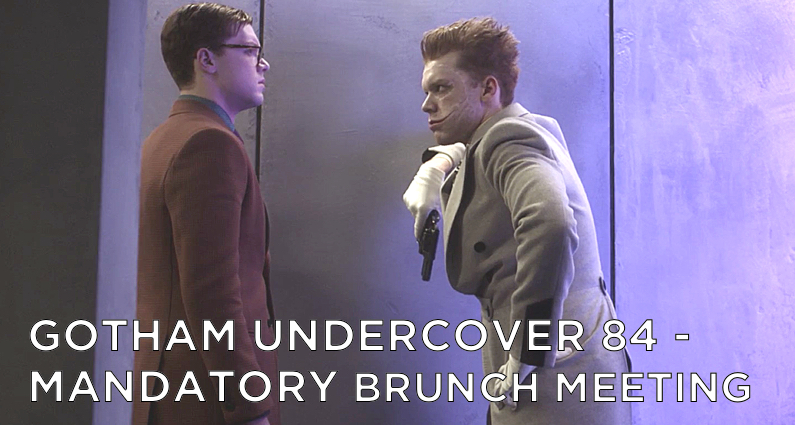 Mandatory Brunch Meeting had quite a few amazing meetings that shocked us. Jerome has a twin who is gifted in other ways. Riddler and Doc Thompson face off. Penguin recruits Butch and so much more! 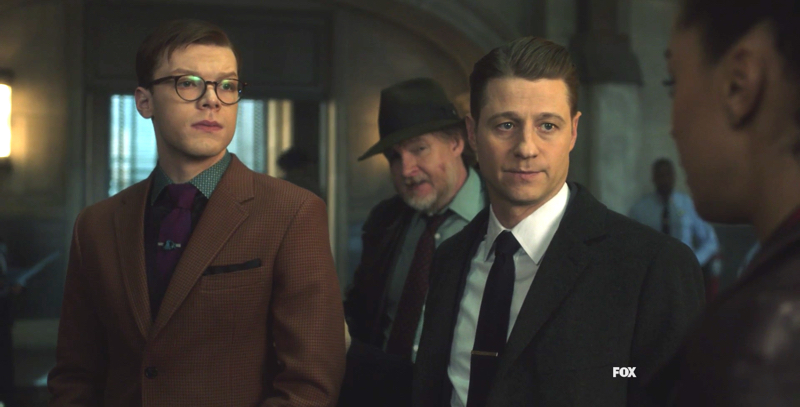 Jerome is ready to make Gotham crazy, but one step remains. The Mad Hatter goes to St. Ignatius School and hypnotizes the headmaster. He got the name of Xander Wilde. Bruce arrives to find the headmaster with a message from Jerome, a bomb. Bruce almost talks him out of it with Jim’s help, but a pocket watch pushes him to blow. Harvey finds out that Xander was a prodigy and went to work for an design firm.

Jerome is holding the first mandatory brunch meeting of the Legion of Horribles, hosted at Penguin’s place. Firefly, Mister Freeze, Scarecrow, and Penguin are all there. Jerome says they are going to make Gotham crazy, what happens after that he doesn’t really care. Tetch comes in with the news Jerome wants.

Jerome and Firefly pay the good folks at the firm a visit. Jim and Harvey arrive after the fun has already started. Jerome has questioned the staff and found that Xander has never been there in person, he always sends a proxy. Jerome beats the name and address out of the leader. Jim & Harvey save folks but can’t stop Jerome from escaping. They find out that Xander has done work for Thomas Wayne so they head over to talk with Bruce and Alfred. Thomas was quite the note taker and recorded meeting with Xander and included the address.

Jerome makes it to Xander’s proxy’s place. Her name is Ecco (Francesca Root-Dodson) and she is more than a match for Jerome. She knocks him out and brings him to Xander. Jerome awakes in a concrete cell with no windows or visible door. Xander watches via video camera. Jim & Harvey show up and find no house but a bunker. Ecco escorts them to Xander. Xander is a fake name. His name is Jeremiah Valeska, Jerome’s identical twin.

They question him. He was smart while Jerome was devious. Jerome threatened to kill Jeremiah, so his mom and uncle Zach snuck him out of the circus to St. Ignatius and gave him a new name. The bunker, Ecco and his whole life was planning for this point. He captured Jerome when the GCPD couldn’t. Jim is about to protest when Hatter and Scarecrow show up. Jeremiah lead Jim & Harvey through his maze and they almost make it out when a hypnotized Ecco stops them. Scarecrow and Hatter detain Jim & Harvey while the brothers have a talk.

It seems that Jeremiah lied about Jerome’s threat. But Jeremiah says that may be, but he still blames Jerome for their mom’s death. Before they can finish the conversation, Harvey & Jim flush Hatter & Scarecrow out and Jerome leaves. They take Jeremiah into protective custody. Later, Jerome and the Horribles are back together and Scarecrow has taken his fear toxin and created Joker Venom version 1.0. They test it on a subject that turns him into a laughing smiling wreck. Now we know what Jerome is going to do to Gotham. 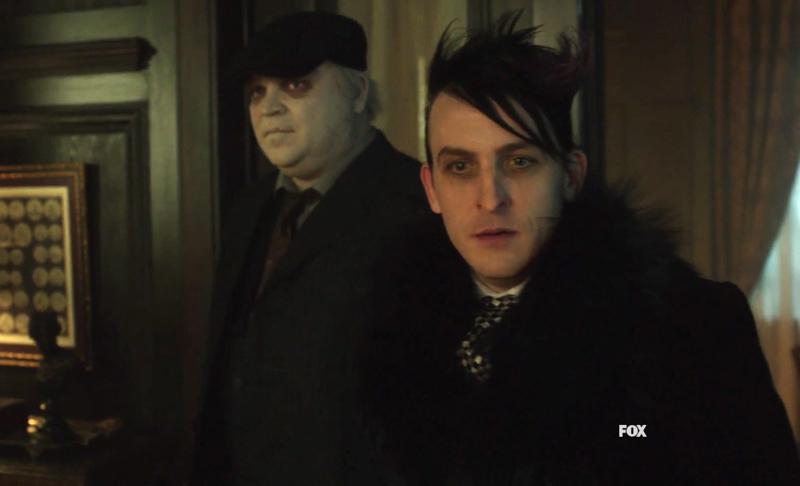 Penguin knows he needs help to rule Gotham again, once Jerome is done with it. So he seeks out Butch. Butch is drinking at the bar and wants to have none of Oswald. Oswald says he needs Butch by his side as his muscle. Butch is his own man now. Penguin says they can have it all back. All Butch wants it Tabitha back, but he can’t have it because of what the swamp did to him.

Penguin returns later and brings a barrel of Indian Hill chemicals with him. He says if Butch helps him they can both find Hugo Strange. He can reverse the condition and get Butch back to Tabby. Butch agrees. Later they head over to Jerome’s Legion of Horribles meeting. Butch is playing Grundy to give them an edge.

Meeting For Games Leads To Love: 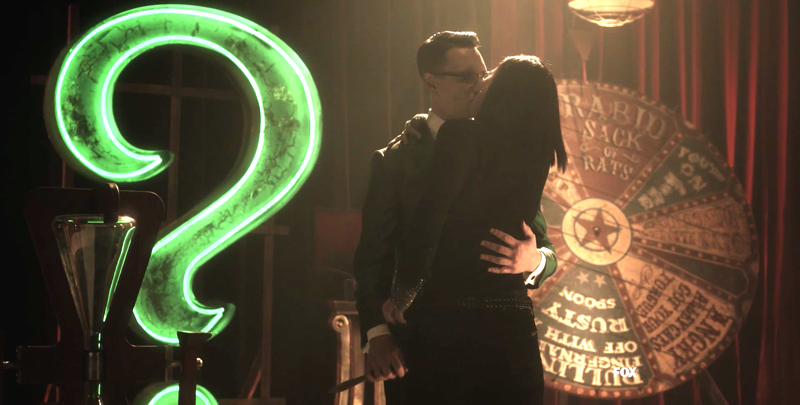 The Riddler has opened The Riddle Factory, a club in The Narrows where people compete to solve his riddles and riddle him. If they win they get money. If they loose they get tortured. Doc Thompson comes for a visit. A down on his luck former gang member has just lost and is about to face the Wheel of Misfortune, when Lee comes to his rescue. But the crowd wants the wheel more than they want to listen to Lee. She offers to play Riddlers game and if she wins he closes the club.

Doc Thompson does not know the answer to The Riddler’s riddle, but she uses her insight into Ed to figure it out. The answer is a promise and that leads Lee to her riddle. The answer is I love you, but The Riddler won’t say it. He won’t let Ed back out so he looses his club. Later Lee questions him and says all this was to get her attention. Even when Riddler is holding a blade to her throat she does not give in. She says she can push him to do better and he knows it. It is a dangerous game and Lee knows it. They end the conversation with a passionate kiss.

The writers of Mandatory Brunch Meeting are Gotham producers and it really showed.  We had so many twists and turns and the acting was amazing in the episode. We got to see Cameron Monaghan play two very different characters who are both twisted in different ways. Doc Lee has to do what is best for The Narrows even if that means romancing Ed out of The Riddler to do so. Plus we saw a reformed alliance of Penguin and Butch. This episode was great!

David Mazouz’ thoughts on the Joker Karen mentioned in the podcast:  Comicbook.com

A Dark Knight:  That’s Entertainment:
The Arkham inmates are still running freely in Gotham and they’re only getting more difficult to catch. Gordon develops a plan, but reluctantly has to turn to Bruce for help. Meanwhile, Barbara finds out just how far her new friends are willing to go for her in the all-new “A Dark Knight: That’s Entertainment” episode of GOTHAM airing Thursday, April 12 (8:00-9:00 PM ET/PT) on FOX.

What did you think of “Mandatory Brunch Meeting” What was your favorite moment from this episode?
Be sure to join our facebook group and get updates on upcoming shows!

Please leave us a review and a star rating on iTunes! They help us improve the show. We appreciate your support!
If you’re in the market for Gotham or Batman books, videos or other merchandise, click on this link and you’ll help support GSM Podcasts.

GSM has a great selection of podcasts about TV, Movies, and life in general.  Check them out here.
Catch Karen on Maid of Steel and Remaking History and Geoff on Stuff I Learned Yesterday (and blog posts for Triplecast).