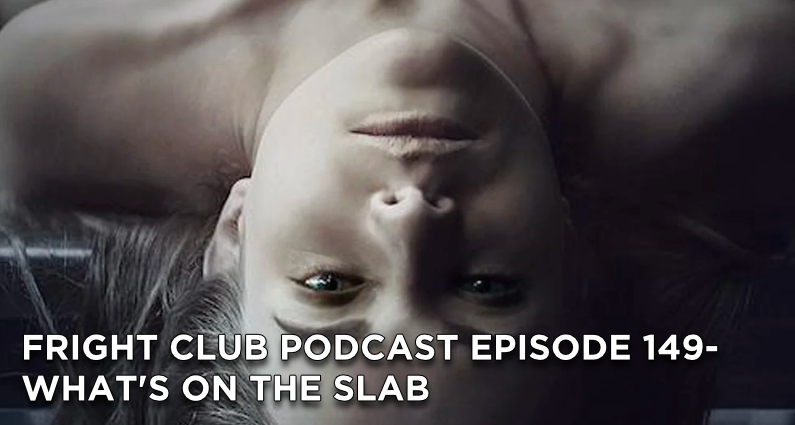 Come up to the lab and see what’s on the slab.

The cold, sterile morgue. That basement examination room with those drawers that should really never open on their own. Those rows of tables with sheets that should not just blow around. It’s a quiet, peaceful place where, in horror movies, attractive naked women lay prone and yet onscreen without a line of dialog for 90 minute stretches.

Thanks to Jenny from Cali for the topic idea.

5. Re-Animator (1985)
Stuart Gordon’s Re-Animator reinvigorated the Frankenstein storyline in a decade glutted with vampire films. Based, as so many fantasy/horror films are, on the work of H. P. Lovecraft, Re-Animator boasts a good mix of comedy and horror, some highly subversive ideas, and one really outstanding villain.

Jeffrey Combs, with his intense gaze and pout, his ability to mix comic timing with epic self-righteousness without turning to caricature, carries the film beginning to end. His Dr. Herbert West has developed a day-glo serum that reanimates dead tissue, but a minor foul up with his experimentations – some might call it murder – sees him taking his studies to the New England medical school Miskatonic University. There he rents a room and basement laboratory from handsome med student Dan Caine (Bruce Abbott).

First-time director Gordon’s effort is superb. He glories in the macabre fun of his scenes, pushing envelopes and dumping gallons of blood and gore. He balances anxiety with comedy, mines scenes for all they have to give, and takes you places you haven’t been.

Ruzowitzky would go on to direct the Oscar winning foreign language film The Counterfeiters in 2007, but back in 2000 he was still riding high on the surprise success of this mid-budget medical horror.

Potente is Paula. She’s new and maybe a little frigid for her prestigious medical school. In one of her classes she recognizes a corpse. Her curiosity piqued, what she stumbles into may look like a by-the-book slasher, but it digs into the scars of a generation whose beloved forebears were either implicit in heinous crimes against humanity, or who participated willingly.

Soon, three young men are alone with a beautiful, naked, dead woman with absolutely no chance of being interrupted for hours. If you’re a little concerned with where this may lead, well, you should be.

Sort of a cross between 2008’s irredeemable rape fantasy Deadgirl and Tarantino’s brilliant Kill Bill, Volume 1, The Corpse of Anna Fritz will take you places you’d rather not go.

As a comment on rape culture, the film is a pointed and singular horror.

And while contrivances pile up like cadavers in a morgue, each one poking a hole in the credibility of the narrative being built, The Corpse of Anna Fritz has a lot more to offer than you might expect – assuming you stick it out past the first reel.

An outsider in a small Minnesota town, John (Max Records) works in his mom’s morgue, writes all his school papers on serial killers, and generally creeps out the whole of his high school. But when townsfolk start turning up in gory pieces, John turns his keen insights on the case.

Records, who melted me as young Max in Spike Jonze’s 2009 masterpiece Where the Wild Things Are, serves up an extraordinarily confident, restrained performance. His onscreen chemistry with the nice old man across the street – Back to the Future’s Christopher Lloyd – generates thrills enough to offset the movie’s slow pace.

For his part, Lloyd is in turns tender, heartbreaking and terrifying.

Bursts of driest humor keep the film engaging as the story cleverly inverts the age-old “catch a killer” cliché and toys with your expectations as it does.

1. The Autopsy of Jane Doe (2017)
Back in 2010, Andre Ovredal established himself as a filmmaker of unusual vision with his found footage style gem Trollhunter. His first English-language film takes him into the basement examination room of father and son coroners.

Both stars Brian Cox and Emile Hirsch are underappreciated actors, and each one turns in a wonderfully familiar, tender performance. Their kinship and associated dysfunction are played with enough restraint to keep it from weighing down proceedings, instead creating a believably protective relationship that causes certain scenes to hurt.

As the two dig in to the mystery of their latest patient, an unidentified woman found underground in a nearby basement, an intimate and claustrophobic but always smart and creepy mystery starts to unveil itself. The result is a chilling and effective thriller.