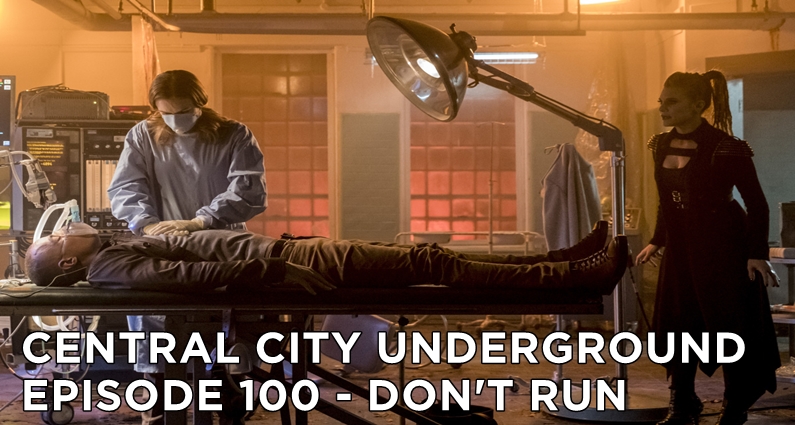 Welcome back dear Undergrounders! In the wake of such an epic crossover event like last week’s, one wonders what cliffhanger could possible keep our attention over the winter hiatus. This week CW DCTV presents to you “Don’t Run”. A tale of deception, self-worth, and the priorities of love. A thinking person’s story. After a very short and non-televised honeymoon, Barry and Iris try to resume life as normal; crime-fighting and kidnappings. Amunet Black returns in all her “white girl dreads form the 90’s” wacky glory. She successfully kidnaps Caitlin who is thinking about her current crisis of self-worth. The Thinker takes this opportunity to whisk Barry away to his secret lair. Meanwhile, Cisco receives his own interdimensional cube mail. Oh boy!

Sacrifices of the heart

Love and what one would do for love, play an essential role in this week’s episode. Iris must decide if the resources of STAR Labs are better used in searching for Caitlin and Barry simultaneously, or one, then the other. Is she willing to possibly sacrifice Barry in the name of logic? Is she willing to risk the life of a friend in the name of love? The Mechanic knows what she would do. She would do what she has always done; sacrifice everything for her marriage. Detective Joe West makes it very clear that there is nothing he wouldn’t do to keep his family safe, including tossing aside the very laws he has dedicated his life to upholding.

We find Caitlin has caught a case of the Christmas-crude. While questioning her place in the convoluted pattern of social chaos that Team Flash calls life, Caitlin is given some rather sagely advice by none other than Harry Wells himself. To make the point, she is then kidnapped by Amunet Black and told that she is the only person who can help. After several salty threats and a botched escape attempt, Caitlin receives yet another lecture on holiday cheer, this time by Amunet. Setting her insecurities aside, Caitlin uses good ole’ science and trickery to gain freedom.

Barry and the Blue Box

Yeah, not that blue box. After being kidnapped by Devoe, Flash is imprisoned in the villains secret lair. While there Barry has an interesting conversation with The Mechanic, and learns that sometimes you just need to stand very still. Eventually Barry figures out a way to out think The Thinker. Thinking he has bested Devoe, Team Flash retreats to the West Family house for some Christmas cheer. After Dibny breaks into Joe’s place and they all have a laugh about it, Cisco receives his Christmas present from Gypsy. It’s a cube, but not the breaking up kind! Barry just has one last thing to check before the night’s party can really get started. He races home to check on a security alarm that’s been set off. Must be that crazy turtle running around tearing up the house again.